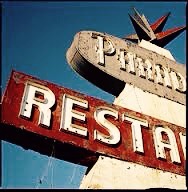 Once a paradise, now in despair.

Poor and broken, no reason to repair.

A fear of communism brought about your fall.

Or was it the rise of capitalism that started it all?

They came by hand,
not from a can.
They are the best in the land. 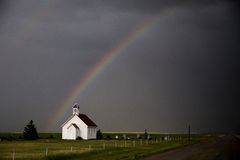 It had been a slow night in the ER, even for a Tuesday. Aside from a few run of the mill heart attacks early in the evening, as the night crept on, ambulance traffic slowed, then came to a halt. The floor settled into an uneasy peace until four o’clock in the morning, when I heard screams approaching the double doors. “Help! Help me, please! My daughter. She isn’t breathing!” The young mother gasped in short bursts, struggling to breathe and pulling at my scrub top as we met at the emergency entrance. “How old is she?” I looked down at what appeared to be a four or five year old child, with cold, blue lips, and no visible injuries. For a moment, I considered the mother may be too hysterical to answer. “She’s Five. The neighbors…their dog was barking. I woke up. Went in to check on Kayla, she was cold. My head…it’s pounding. Oh God, what’s wrong with her?” I checked her pulse for good measure. Nothing. By this time, Cassandra, the night shift CNA, had come to carry the mother off to a waiting area, where she would meet with a doctor who would assure her that we “did everything we could,” and before the realization of loss could weigh in, she would face tough questions from police. I paged a code, and continued CPR on the dead girl while waiting for a team of doctors to arrive. After submitting the night’s paperwork and giving the shortest report in weeks, I would be on my way out at seven.

I first discovered I wanted to be a nurse before it was acceptable for men to be nurses. In Toys R Us, while all the other boys hovered around the electronic toys, picking out monster trucks and remote control cars, I was often over in what was considered the girls’ section, where the nurses’ uniforms and toy medical kits were stocked in neat, inviting rows. I imagined one day using a stethoscope to listen to a dying kid’s heart like I saw paramedics doing on that show Rescue 911. My first experience with a real emergency, and the first time I got to see the dirty work in color came when I was just twelve. My buddy Ryan and I were skateboarding in the U shaped cement outflow of an old, drained pond in our neighborhood when, going out of our way to show off our skills, one of us was bound to get hurt. Ryan crested to the top of our private half pipe on the side opposite me, and for a brief moment, our eyes met, as we laughed and smiled at one another, sharing in the boyish rush of adrenaline and youth. As he descended, a stray rock or stick, or some other debris became tangled in the wheels. A sharp crack and skidding issued from the board, but the cry from Ryan was unmistakable. Terrified to look, I still found myself wanting to see. Besides, no one even knew we were here, so if he couldn’t make it out, I would have to go find help. I turned to look and saw skids in black and red. Tire and blood. I saw Ryan, lying in a heap, his left leg twisted in an impossible shape. Jeans ripped just below the knee opened to reveal the white of protruding bone. I sat for a moment, frozen, not knowing how to respond. I had never seen such an intense injury, I had never seen a part of the body come out from its comfortable hiding place beneath the skin.  “Andy, Andy? Go get my Mom! Please.” Still, I sat there staring as Ryan pleaded. I felt frozen by fear, confusion, but most of all, fascination. I continued to marvel at the streaks of blood on the concrete and the messy break of the bone. I pondered how strange it was that Ryan could still talk to me, while having a part of his body exposed. I wondered what other parts of the body worked that way. What other ways could we be broken and still function as conscious, intelligent beings? “Andy!” I snapped out of it. “Okay Ryan, I’ll be right back.”

His clock tells the same time. 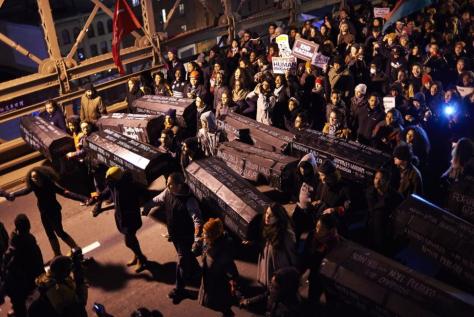 What if their will is indestructible?

In this multi-day writing and editing challenge, we’re putting your red pen to the test. Each day, 10% of your post gets the axe.

Cassie, Cassie
If you could hear them now,
your rebellious spirit would scream and howl.

Cassie, Cassie,
Why do they lie?
And support the cause that led you to die? 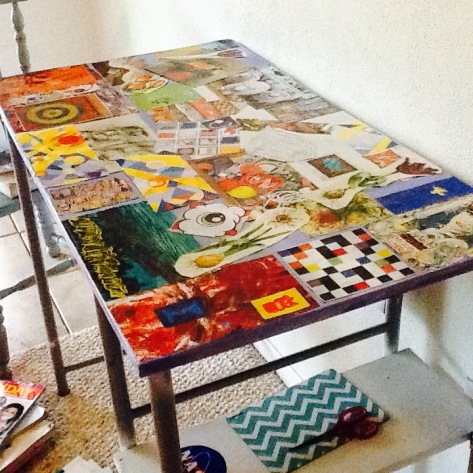 My posts have slowed recently, and have grown noticeably shorter, but not without good cause. I have been working to settle in for the long haul- creating an outline for what will hopefully evolve into a manuscript, and I have now nearly completed my first upcycled workspace. The object is to create a more structured environment, away from the couch (and the urge to doze). The desk pictured above has changed hands three times, most recently serving as an aquarium stand for my oldest daughter. She decided on a whim to paint the top a metallic, lilac purple (?), hence the collage you see pictured. Hopefully these images will serve to stimulate the mind and provoke the imagination. A few clear coats to nail down the collage, and a writing desk she will be! Stay tuned…

The year was 1995, and my family had just returned from a two week vacation to New York, with stops in Philly, equipped with plenty of public transportation rides under our belt. Dad insisted that if we were going to head off to the Big Apple, we were going to do it like real city slickers. None of that Georgia hick stuff- No guided tours, no fear of navigating the big city. In New York, we would do as New Yorkers. And we did. Just a little shy of two years following the ’93 bombing of the World Trade Center, he insisted we go to the top. Mom argued in favor of the Empire State Building, but luckiliy she lost the battle, and so we cruised the express elevators to what seemed the top of the world. To my twelve year old mind, I had found my place of belonging. Immediately, I saw endless possibilities open before me- laid out in busy streets filled with colorful, vibrant people. Culture and learning was bustling, loud, and brilliant at every turn. I. was. in. love. I found inspiration in the movement of people, the speed of subway systems, and the calming, evening ferry ride back to Staten Island. On the last ride over, I tossed a quarter into the Hudson and promised myself I would one day return. For now, it was time to return to the crop dusters and abandoned strip malls of home.

Soon enough, Mom and Dad returned to work, and I spent a few days keeping Grandma company before school started. That’s when the red bumps started appearing. I noticed when I put on my bathing suit, I had five. Then, when it was time to dry off, I had twenty. Also, they itched like hell. Grandma told me not to scratch, so I tried not to. I don’t remember when exactly things took a turn for the worse, but turn they did. I woke up one morning to find that my former red bumps had turned into inch-plus sized blisters, filled with mystery fluid. Worse, they covered my entire body. I couldn’t open my mouth without a blister popping.

In keeping wth political tensions at the time, most of which I was completely unaware, my Mother began to get nervous. What kind of devious witch’s brew of a disease did I have? Some sort of mutated, genetically modified chicken pox? Was I patient zero in a biological attack? She even consulted with her nurse friends who said I looked like pictures they had seen in medical textbooks of Smallpox patients. My breathing had become affected by the pus pockets in my throat, and I couldn’t eat. So, off we rushed to the Medical College of Georgia, but not without first stopping at Checkers for something to eat, and in my case, to drink. We pulled up to the drive thru, and the window clerk was visibly horrified by what she saw in the backseat. She motioned for all of her friends to come over and take a look, and pretty soon there were five people, their mouth breathing faces pressed to the Checker’s window, jaws on the floor.

Eventually we made our way to the hospital, where we overheard the admissions clerk say I looked like “Someone beat the devil” out of me. At this point, I’m naturally feeling pretty bad about this whole chicken pox thing. We were told multiple times that I would be permanently disfigured from the blisters-that they were very similar to burn injuries. Turns out I had Chicken pox laced with Staph, not smallpox, much to my Mother’s relief. I was not a victim of biological warfare, just a victim of being born before the varicella vaccine. All in all, I spent over one week in the hospital and missed the first two weeks of fifth grade. This is all retrospectively funny only because I survived. Antivaxxers: You’ve been warned.